WHY MCCANNS FEAR THE TRUTH OF THE LIE 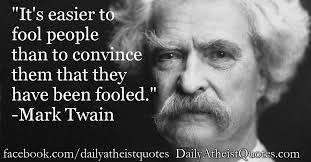 It's really interesting to return to the McCann files and re-read these old newspaper articles from the early days.  The old reports of the Madeleine debate at the LSE in January 2008, are particularly enlightening.  At this gathering of the great and good within the media world, no attempt is made to cover the contempt they feel for their readers and the public at large.

We are too stupid apparently, to grasp the finer details of Kate and Gerry McCanns' innocence, and the reason for the public backlash stemmed from jealousy of the well to do, neatly pressed, doctors.  Sun readers especially, come from a lower social demographic and lack the ability to distinguish between fine dining with friends and going out on the lash.  The hatred towards the McCanns was clearly based on ignorance in the ways in which their 'betters' take care of their children.  Look how quickly all those middle class journalists and commentators jumped on the bandwagon to say, 'we do it too'.

While Sun readers may not have Doctorates and Degrees, they have a more caring attitude towards childcare, and they have the ability to spot a blatant liar when they see one.  Let me make it clear for the intellectuals and academics who seem to have gone off in a whole bizarre direction with this one.  We ALL have the ability to spot lies, it is a natural survival instinct, and none of us would be here if those instincts hadn't been finely honed.  And of course, instinct is the key word here.  It is not something you learn from a book, film or lecture, it's already there.  Though to be fair, it may be heightened among the lower echelons as their ancestors had more to contend with in order to keep the gene pool going.

All those thousands of Sun readers writing into Kelvin McKenzie could see with their own eyes that Kate and Gerry were lying through their teeth.  Grieving parents do NOT behave as they did.  We have all suffered loss and bereavement and we know what it looks and feels like.  In what universe does the loss of a child compare with being overdrawn on your student account?  In what universe do you lounge around sunbathing (accompanied by a government spokesman) while strangers trek the surrounding countryside searching for your child!

We all know Gerry and Kate would have had entirely different treatment if they came from an ethnic minority, or if they were unemployed and living on a Council Estate.  That's the way society is.  What those who claim to be far more intelligent than the antis fail to understand is that we are not mad at Kate and Gerry because they have got a nice house, we are mad at the horrific crime that is being covered up.  Their social status is irrelevant, parents can't just make their children disappear with no questions asked.  And if saying that makes me ill bred and uneducated, then so be it.

Meanwhile, anyone still taken in by this hammy acting really should start to question everything. Have they, for example, had a serious knock on the noggin?  Have they been overdoing it with the hallucinatory drugs?  Have they been invaded by a body snatcher or demon?  Some McCann supporters have been known to thrash around on the floor speaking in tongues.  Anything is possible.

The Sun may support Kate and Gerry, but 98% of their readers don't.  They can push the abduction and bent cop story all they like, but within seconds their readers can discover the truth via their tablets and smartphones.

But this snippet is not without a happy ending.  We are now entering the phase when all those stuck up, we know better than you do, pompous dinosaurs will have to face up to the fact that their readers were right and they were wrong - and ouch, that's gotta hurt.  And just to add to their pain, it wasn't lack of fine breeding that stopped us seeing the Emperor's new clothes, it was what my old Dad used to call 'a bit of bleddy common sense'. 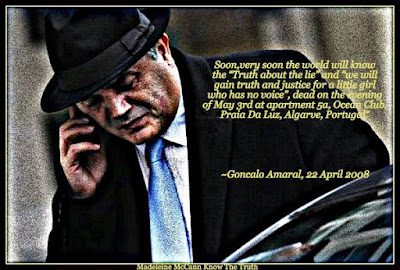 For whatever reason, Kate and Gerry McCann have focused all their anger and hate towards Goncalo Amaral for the past 9 years.  Goncalo is the detective who had charge of the original investigation and who was closing in on them, when by pressure of the British government, he was removed from the case.

Since then the McCanns have fought a proactive campaign to discredit him, aided and abetted by a complicit British media and, going by what was said by Craig Murray, quite possibly the incumbent government too.  Tabloids carried hundreds of headlines and front pages insinuating that Goncalo and his team were a brutal mob of hard drinking, sardine munching foreigners who couldn't be arsed to search for Madeleine.

In 2008, Goncalo published The Truth of the Lie.  A book the world was waiting for, because quite frankly, no-one believed a word the McCanns said.  For all this smokescreen of innocence, the world was whispering.  Goncalo had every right to defend his reputation.  Ultimately, that is the only worthwhile legacy we leave behind in this world.  And his book wasn't malicious.  It was an honest account of a very sad story, he even shows compassion towards the troubled Kate, and a human understanding of the situation they found themselves in.

Above all, it is a factual account of the original Portuguese police investigation, it doesn't differ from the police files that were released into the public domain.  What troubled Kate and Gerry was the fact that it exposed the deceit the McCanns used and continue to use, in their media campaign.  A public face that says 'all is well and the police don't consider us suspects', and the chaotic reality of what was going on behind the scenes.

What irks them most of all, is that Goncalo's account of the investigation is beautifully written and easily accessible to anyone.  If it were serialised in the Sun for example, the papers would fly off the shelves.  It should have been a worldwide bestseller, it is far superior to Kate's Madeleine and it was of huge public interest. If it were widely read, the myth of Madeleine's abduction would be blown wide open, any dreams of a Gerry and Jim run National Centre and television channel for missing children, would be dead in the water.  As indeed, they now are.

Goncalo's book will still be a best seller.  The ruling in the Portuguese higher Court will have a huge knock on effect.  There is a good likelihood that publishers and indeed, newspaper moguls will now take a chance.  Leveson did not receive the public support that was anticipated.  The public are no longer angry about press intrusion that went on, because once the anger subsided, they realised that gagging the press was not a good idea.  No one is hacked off anymore, as a glance at their website shows.

Hopefully in the next few days/weeks Goncalo will enjoy the magic of a publishers bidding war.  The McCanns have had their legal claws removed, they can't sue everyone.  When he walks onto the set of Oprah, he will receive a standing ovation, and I hope she comes out of retirement to do a one off special.

Whilst I agree that people should no longer share Goncalo's book free online, I hope he remembers that all those who shared it are the ones who have been fighting alongside him and getting the truth 'out there'.  GoFundMe was so successful, because the contributors had read the book.  He should also know, that all those of us who have read it free online, can't wait to buy the first UK edition, and if we are lucky, signed by his own fair hand!   I'm still holding out to write the Hollywood screenplay, in my head I have already cast Antonio Banderos in the lead!

Posted by Rosalinda Hutton at 13:42