TOO LEFT FOR THE LEFT - but Dennis Skinner is right. 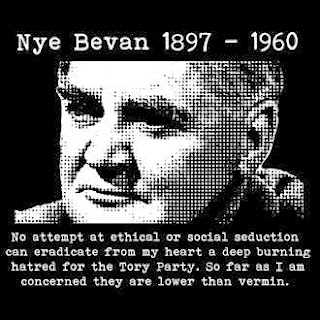 These words were posted on Facebook this morning by the amazing Dennis Skinner - ye olde beast of Bolsover - I urge everyone to 'friend' this hero of the Left and share his posts.  This is the reality of Tory Britain, and fluffy words cannot disguise it.  The awesome Dennis, at the grand old age of 81 is still in the House of Commons kicking tory arse and speaking up for the people who elect him!

When will society accept that punishing those trapped by poverty by taking away the little they have, will not turn them into pillars of the community?  The good Lord himself said, 'the poor will always be with us' - albeit he was using it in a selfish way at the time, the first bit is eternal. Society is a mixture of the brilliant, the stupid, the creative, the ordinary, the hard working and the feckless, and unless crazy scientists can isolate and eradicate the genes that like to drink, party and take drugs, we're pretty much stuck with it.

Punishing the feckless achieves nothing.  In fact it makes their lives, and the lives of their families worse.  Grinding poverty perpetuates the stress, the depression, life becomes merely a day to day existence.  This new wave of toryism will break up families who are already under stress, the NHS, Housing Benefits, and every charity involved with homelessness are stretched to breaking point.

What is the point of the Bedroom Tax?  It is a costly exercise in bureaucracy to satisfy the petty minded whose neighbour may or may not have a spare bedroom.  These are the politics of spite - no savings are being made.  Do the smug workers who support this petty, spiteful tax, get a flatscreen for the loo and congratulate themselves that elderly people who have lost their marbles are being turfed out of the homes they have had all their lives, or that the bedridden are deprived of essential overnight care? The Bedroom Tax will of course free up lots of property in areas earmarked for investment, whilst also getting rid of the undesirables.  Not that that could possibly influence anyone's vote.

Our high streets are shells, shops are boarded up, people are queuing at food banks.  Why anyone had faith in Gormless George Osborne I will never know. If young people think this is normal life in Britain - its not!  I was a child of the 60's, but even those before me never suffered the indignity of waiting in line for food.  The class dunces have brought about a triple dip recession.  The kind of manmade economic disaster that brought the world to its knees in the 1930's and a huge upsurge in the arms industry thereafter.

Bravo to Dennis Skinner, the politician of the people, and bravo to Russell Brand for breaking celebrity ranks to speak out against the atrocities being committed by this government.  Nothing has been saved, the borrowing has gone up - and lets hope there is a public enquiry into who made money out of Atos once the dust has settled.  These tories are carpeting their own destinies, and they see gated communities with the riff raff living on the outskirts.

Lets get this 'workers and shirkers' diatribe into context.  Its really no different to the sickening 'deserving and undeserving' poor, the sick and disenfranchised judged by the Victorians on their capacity for obedience and sobriety. It can even be compared to the middle ages when the national pastime for church goers was throwing rotting cabbages at those unable to support themselves.  These days Tory Party spread the love with billboards on double decker buses.  If they have a slogan competition, I'm going with 'Kick A Pleb' - I suspect Cameron hasn't forgiven the hoody for dipping his wallet when he gave him a hug.  I jest - as if.

The contented workers of course, are up at dawn merrily singing and dancing like that 'who will buy this wonderful morning' scene in Oliver.  Except they are not.  On the whole they are doing repetitive, thankless tasks for as many hours as they can bear in order to save another embarrassing trip to the Food Bank.  Thats the reality for many as zero hours contracts become the norm, who was it who wanted rid of the Unions?  The employers now hold all the cards and the millions of unemployed can take or leave it.  If you won't work for a pittance, we will have you back next week working for nothing. There will be some fat turkeys and raised glasses at the Christmas tables of the bosses this year, I'll be bound.

The smug workers accept their lot and buy into the idea that depriving the lazy bastards who don't open their curtains til midday of cash will somehow make their own lives better.  It won't.  These ideas are coming from people who think workers' disputes can be resolved by a darn good thrashing, they have absolutely no idea of what life is like on a sink estate.  Unemployed parents will not give up the Diamond White and the fags, anymore than the Judge will forego his pre luncheon tipple of brandy. The kids will go without shoes, the rent won't get paid but the booze and fags will stay.  That is the reality, because when you are living in hell being blotto is sometimes the only way out.

Even the Labour party responded to the public's demand for more Law and Order.  'We'll march the dirty rotten sods to the nearest cash point and fine them £100 on the spot', said Workhouse Master Blair - which did make me chuckle, and think yeh, good luck with that.  He's obviously never met a Chav on a sink estate - they mostly bank with Cash Converters.

Generation after generation are caught in a poverty trap simply do not have the resources to escape. Everything costs money and life on basic essentials leaves no room for self improvement.  From the very start they are disadvantaged.  The schools on the sink estates are deprived of money because they do not perform as well as those in the leafy suburbs, who are rewarded.  Having already been pre-labelled 'chavs' they become regular targets for the police, they acquire cautions, minor convictions - a record that ensure they will never, ever, get a legitimate, well paid job.  Those who screamed for the blood of the daft kids who got caught up in the riots of 2011, must now face the reality that those kids will most likely face a life on benefits, because they will never pass a CRB check.

The cuts the tories are inflicting now will have long term effects that will be catastrophic.  Imagine the NHS 20 years hence,(should any part of it survive) coping with the results of today's poor diets, worsened as cheap is replaced by cheaper?  Will there be enough prisons to cope with the feckless? Will alcohol be priced out of their reach? Will the world be a better place if that lonesome old tramp dies in a freezing doorway without the cider that used to get him through the night?

The words of Nye Bevan should ring in all our ears.  The pampered elite running today's show are no different to their forbears.  They want the same things.  Cheap, or hey ho, free, labour for their factories (shops, call centres, etc), and they should be encouraged with generous tax breaks to get richer by 'employing' (lol) more workers thus removing them from the jobless figures and teaching the lazy bastards a lesson. To demonstrate tory thinking, you must think of the population, not as people, but as a resource. Employees become units, eg. over a £250k lunch with the PM,  Dave might say 'well how many units do you need' to his mate with the fat wallet who wants to open up a few more sweat shops. Its like they have brought slavery in through the back door by discovering a loophole.

There is a cruelty to Tory ideology that should send shutters down all our spines.  Nothing is being gained by these benefit cuts.  Official statistics show that benefit fraud is less than 0.1%.  The shambles that is ATOS, is costing more than it is saving.  The death, trauma and stress that is being inflicted on the most vulnerable in our society is incalculable.  May God forgive these people for what they are doing, I know I can't.

I want to add my voice to the protest and when history looks back on these times it will see that 53 years after Nye Bevan's death, the Tories haven't changed one bit - and they never will.