Last week I turned 58, and given how ill I was a year ago, I am lucky to still be here.  But that's another story for another day.  In my 58th year I look around me and see devastation, the town I have lived in for most of my life is but a mere shell of what it once was.  In the 1980's, the town centre had a jewellers on every corner, everyone had loadsa money and greed was good. Second hand shops were rare, and tucked away secrets shared by canny women who's mums scoured jumble sales to keep them dressed up to the nines.

Now my local town is desolate, the jewellers have been replaced by pawnbrokers, but the gold buyers have moved on - there's nothing left. Every shop is aiming for cheap and cheaper, Poundland was gazumped by 99p world - the only other people able to maintain high street premises are large charities. 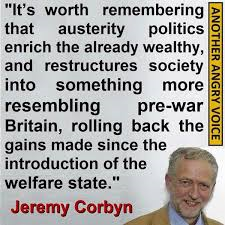 The Thatcher years of plenty were nothing to do with tory policies, they were to  do with the solid economic foundations of their labour predecessors.  Governments who ensured that the profits from the nationalised industries were ploughed back into the British economy for the benefit of the many, rather than offshore tax havens for the benefit of the few.  Moneyspinners, like air, rail, steel, coal, National Health, all carved up and shared among the super wealthy.  The unprofitable areas abandoned (local post offices), or left to run on a shoestring.  Sadly, history shows, that Labour creates tories, once people begin to prosper, they abandon their socialist roots. Otherwise known as the 'I'm Alright Jack' attitude.

As the UK flourished, the word 'Union' became dirty.  A word to be followed by a sharp intake of breath and a spit and a cuss.  They were destroying the country, the tory red tops cried.  'Turn off the Light' if Labour get in they screeched, and the headline skimmers duly obliged by voting Tory.  Thatcher pounded the Unions, metaphorically and physically, she ground them down through sheer physical force and popular demand, she had won the propaganda war.

Now we are seeing the tragedy.  We are seeing the zero hours contracts, the daily loss of workers and individuals rights.  The enforced free labour.  The working people no longer have anyone to fight on their behalf.

I have lost faith in politics over recent years - all I have seen is a parade of photogenic puppets who will persuade the gullible we are all middle class now. Well we are not!  We have long since broken down into sub divisions.  There is a very real and growing underclass.  A whole generation of kids who will know nothing but unemployment and food banks.  Families with little 'Timmys' praying for a turkey from a growling Ebenezer.  My heart sank when Tony Blair recommended that anti social thugs should be marched to the nearest cashpoint and fined £100.  He and his government were obviously clueless and had never visited 'the streets' in their lives. 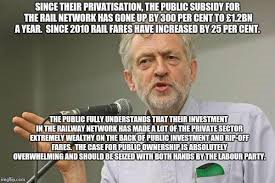 Our streets are full of homeless people, kids are going hungry and shoeless and this is the 21st century!  Bah, humbug, there is no money in the pot!  In 2015, that's not just stupid, its beneath contempt!  In 1948, in the aftermath of WWII, the UK built the NHS from scratch, have we not learned or indeed, earned, anything since?  With an ageing population, the NHS should be expanding and reaching out into the community with preventative treatment.  The UK is faced with an obesity crisis and the present NHS will not be able to cope with the onslaught it faces.  Where is the British pride?  Shouldn't we be making the NHS a model of humanity and healthcare the world over, as it once was?

Jeremy Corbyn is a breath of fresh air, a man of principle, the only one it seems ready, willing and able to take on the Goliath that is austerity.  An evil philosophy that is designed to punish the poorest and weakest in our society for the sins of the greedy bankers. And that evil philosophy is supported by a media campaign to demonise the 'underserving' poor still further.  Almost every television channel is devoted to those on benefits, they get a good telling off on Jeremy Kyle, then we gawp into their homes and lives on Benefit cheats/dogs/by the Sea or jobless and suicidal. We watch in amazement and then feel better, because we would never behave like that.

Well guess what?  Anybody could be like that, a Director of thriving company, could be in the dole queue tomorrow.  A lot of industries are getting a huge shake up by technology, including the traditional middle class professions, when money stops flowing in society, it hits everyone in the end.

The UK needs a New Deal, it needs a leader with the guts to invest in its people and create new jobs that suit the society we now live in. We need MORE healthcare, not less.  Ditto science and education.  Get a scientist in government, someone with vision who can create the industries of the future. 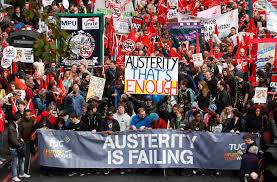 We need a government with a more humane approach to our society.  One who will invest in its people and inspire them towards better lives. If the NHS were working at full capacity, it would employ thousands more.  Ditto social and frontline services that are coping with the fallout from these cruel austerity measures.

Economics is not a difficult subject.  Where a society has full employment cash remains in transit, benefiting everyone along the way.  Try starting a business with no cash and see where that gets you. The only way out of this recession is through the creation of industry and jobs based on society's needs and aspirations.  These inhumane times need a human altruistic approach. The 0.5% of fraudulent benefit claimants did not bring on this economic disaster (and it is a disaster) and depriving them of a few pounds won't fix it. 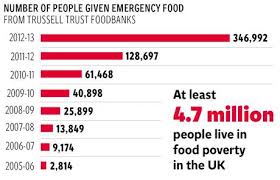 Society will always have its fair share of deserving and undeserving poor.  The good Lord couldn't fix it in 32 AD, and we can't fix it now, though happily (or arguably), we have stopped placing them in stocks and throwing stones at them. Some people are no better than they ought to be at every level of society and in every profession, but it is always wrong to punish an entire group for the sake of a tiny few.  There but for the grace of God and all that. Besides, those who are comfortable now cannot guarantee they will be comfortable in 5 years time, and all the signs are, they won't be.

This cruelty has to end, and Jeremy Corbyn thus far, is the only one brave enough to tackle it head on and hopefully end it.  When something is inhumane, you find another way, you don't carry on with it.  Starving and punishing people doesn't make people behave better, it kills them.  And that shouldn't be happening in the 21st century.

Of the four leadership candidates, Jeremy Corbyn is the only one standing for the people the Labour party once represented.  He is not a left wing lunatic, he is no different to those labour party pioneers who brought us the NHS, the Welfare State and basic human rights in the workplace.  If that is radical, then radical is what we need.


Jeremy Corbyn will speak along with
• Martha Osamor • Owen Jones, writer and campaigner• Ken Livingstone, former Mayor of London• Shadia Edwards-Dashti, Stop the War Coalition• John McDonnell MP• Cllr Emine Ibrahim• Mark Serwotka, general secretary of PCS• Ellen Clifford, Disabled People Against Cuts
It will be a huge meeting. Please be there at 5.30pm if you can.
If you can come, please email alank@swp.org.uk