Welcome to my new current affairs blog, where I will be commenting on news items that catch my eye and where I hope readers will feel free to comment too.  I love to hear alternate views, just spare me the rants and the name calling.  I want this to be a place for civilised debate.
Please, if you like my 'out of sync' views on society, and enjoy my blogs, retweet them to your followers and share them on facebook.  I want an unbound platform where I, and those who read my blog can comment freely.  I have no party line here, the best argument wins - I am going to see if I can find a 'likes' gadget for my new revamp.
There are just not enough platforms for non comformist views and those that do exist are led by often pompous, university educated middle class professionals who have no idea what being 'working class' really means.  They have never lived on a Council estate or had to leave IOUs in their kids' piggy banks, including the ones they had carefully hidden under the bed.  To this day, there is no trust in our family, lol.
Regarding the comments, my quest is to get everyone writing.  I want to break down the barriers, that 'thing' that stops people from using their greatest power - the ability to communicate.  At some stage I might get a writing class going, or indeed publish a 'how to write a book' book, for those still lacking the confidence to put pen to paper.
Meanwhile, please bear with me as I fiddle about the with the layout, lol, it may be like sticking 100 monkeys in a room with typewriters and waiting for a Shakespeare play, but I am going to try a couple of things out.  Including thinking up a name for my new blog, any suggestions considered!  Yes, I too think Cristobell's Column is naff, but I wanted to get 'Cristobell' in the title.
Cristobell's Column
You're not alone, he whispered...
﻿﻿ 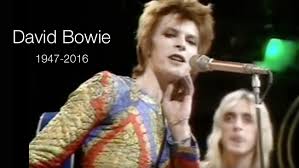 As a young rebellious teenager locked up in the care of demonic nuns, I fell in love with David Bowie at first sight. I was even sickeningly good to earn the privilege of watching him on Top of the Pops. He was the opposite of everything those evil creatures were attempting to pound into me with their fists, he came from another world, a world so different to the one I lived in, maybe he did come from Mars.  'I had to phone someone, so I picked on you', and that you was me and yes, it was far out, I heard it too!

The nuns sneered at his makeup and cringed as he put a friendly arm around Mick Ronson, but I saw only warmth and affection and best of all, an acceptance and celebration of being different.  He told me it was OK not to be the same as everyone else, and at that time, as an oft suicidal 14 year old, I desperately needed someone, anyone, to tell me that.  Oh no love, your not alone, I've had my share, I'll help you with pain, David sang, and he did.  RIP Starman.

You can't live your life behind a phone bro! 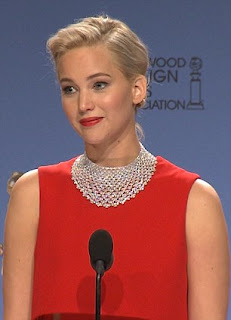 I think a big round of applause should have been in order for the amazing Jennifer, coolest woman on the planet, Lawrence, when she scolded the reporter with a mobile phone.

There doesn't seem to be any etiquette whatsoever in the use of mobile phones, ergo it has led to our being one of the rudest, most bad mannered societies in history.  Whoever is on the end of the phone, always seems to take priority over the person directly in front of the mobile user.  'I must take this' translates as, speaking to someone (anyone) else, is more important than speaking to you, even at the Golden Globes!  It may be the 'norm' but it is appalling bad manners.  I have reached the point where I hate being in the company of people who are constantly looking at and playing with their phones. So cheers Jennifer, my first feminist role model of the year, I am no longer going to tolerate it either!

The Not so Odd Couple 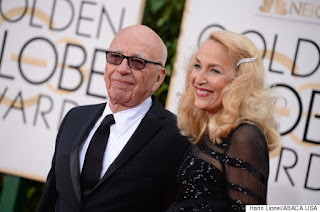 I can kind of see why Jerry Hall has got together with Rupert Murdoch, where do you go after Mick Jagger? I remember thinking on similar lines when Jackie Kennedy married Onassis.

I'm the same age as Jerry Hall and I wouldn't be looking for a young stud muffin or a guy who's problems I 'might' be able to solve either.  As much fun as it was in your 30's, teaching young airhead Adonises the joys of outdoor sex and how 'do it' between stations when on a train, at 59, you could put a hip out.

I'm not going to bitch about Jerry and Rupert, they are a power couple.  Just as Mick Jagger didn't want a subjugated woman, neither does Rupert - which of course says much for his machismo and self confidence - go him!  Strong men marry strong women.  Like Jerry, I too couldn't get together with an unarmed man, where's the fun in that?  Jerry is a Queen who needed a King, she was never going to marry one of the footmen.  In fact it is dallying with footmen and the like that cost many Queens their realms and in some cases, their actual heads.  Jerry's head is firmly screwed into place, she is a Queen because that is how she sees herself.  Anyone of us could do the same, if only we had the confidence.  It is that confidence in herself that sets Jerry apart, but sadly I doubt the bitches of Fleet Street will see it that way.

Tis my theory that when women hit the menopause they get their brains back.  All those hot flushes are actually 'wtf was I thinking' moments, especially when watching our own Masai warrior/Turkish waiter drive off into the sunset with the orange teenager from next door and a large deposit for a fun café on the Marmaris coast.  Once men lose the ability to set our hearts a flutter with a whiff of testosterone or the flex of a bicep, their power over us is pretty much gone.  As much fun as it would be spending a week getting high with Jack Nicholson in Vegas or New Orleans, (personal wish list), I doubt I could keep up with him and I'd never get me bunions into Jimmy Choos.  I'll have to see if he is up for the zimmer frame version.

I prefer to love men from a safe distance these days.  I can sort of see why Gerrard Butler's Spartan wife sent him off with an 'in it or on it' (it being his shield) final word.  His wild lovemaking and throwing around of all the bed linen would get on my wick for a start.  All that tidying up and laundry!  (not really, tee hee), but it must be said all that leather gear would play havoc with your Indesit.

But back to Jerry Hall, she has actually gone up in my estimation, just as she didn't settle for a string of wide boys or yorkie bar muchers a la Katie Price and Kerry Katona, when she was young, she hasn't lowered her standards as she had got older. Kudos to Jerry say I,  she treats herself as she believes she deserves, and I think there is a lesson for all of us in there somewhere.  Women of our age deserve to be pampered and treated with respect.  I bet Rupert doesn't tell her to buy herself a birthday card while's she's out buying his beer.  'Pick up 48 cans love, it will save you going out again'.  Just can't see it.

Jerry's critics should stop for one moment and think about their words.  Whilst Angie Bowie, Jerry's one time contemporary who was also married to rock legend, she is now competing with Z listers in the Big Brother house, and being criticised for hanging onto the Bowie name. Jerry has clearly moved on.

Jerry compliments Rupert, she doesn't want a doormat either.  Just as I would for any other couple lucky enough to find love, I wish them well.  Though I would suggest a purpose built, fine china free, room for when the sparks fly! 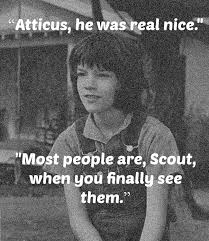 Posted by Rosalinda Hutton at 17:37