A STORY YOU WILL NEVER FORGET 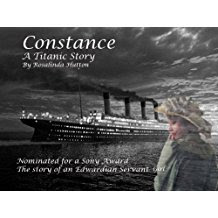 I tend to get a tad maudlin as Hogmanay approaches and loved ones come to mind.  I never know if that is a good thing or a bad thing, but I tend to think 'good' because the memories always make me smile.
I feel blessed that I have had such incredible people in my life, my dear old mate 'Big Lynn' who's light burned so bright, it only burned half as long'.  My mother who's craziness eventually made sense, didn't live to a grand old age, but she lived every minute she was here.
And my dear old dad, who never stopped believing in me.  To this day, the last birthday card he sent me is by my side 'and without any doubt at all, your impending success in the future xxx Dad', he wrote.  He loved my writing and he loved my success, small as it was, a play on the radio and a column in a local newspaper.
Sinclair Mathieson of The People's Friend found my story of Constance compelling, beautifully written and deserving of a wide audience.  Unfortunately, it was 'too political' for The People's Friend, but he wished me well.   Happily, it was picked up immediately by a former BBC producer Paul Kent for a new digital radio station called Oneword.  He was able to produce it in 'one' without any editing or alteration, and so good was his production, it was nominated for a Sony award, and Oneword won Radio Station of the Year.
Constance is an original story of an East End servant girl in Edwardian times, but more downstairs than upstairs.  Constance is a dreamer with ideas way above her station, who steals the family silver and runs off to America.  Unfortunately, the ship she sails on is The Titanic.
On Christmas Day 2001, as the rest of the UK sat down to watch James Cameron's Titanic, we tuned into Oneword Radio for the premier of Constance!  We cracked open the champagne and thereafter no-one was allowed to speak for an hour.  My Dad always believed 'Constance' would be the making of me, bless him.  And it should be, it's a great story and the heroine is as delicious a character as Scarlett O'Hara.
Constance does deserve a wider audience, it is a gripping read with the kind of story that cries out for the big or small screen.  It was fantastic on radio.  If anyone knows Ken Loach, it's just his kind of thing!  Meanwhile, to all those who enjoy historic drama, and my unique writing style, who want a cracking story and a compelling character to engross you, please do give Constance a read.  It's long enough to sneak away for a couple of hours, but not so long that it eats up all your holiday.
Please forgive the 'homemade' book cover, and any errors or omissions within.  Think of it as 'First Edition', that might one day be precious!  Before the professionals get hold of it!  It has been discovered by those 'in the know' twice, I am hoping third time it will take!  Unfortunately, it has rather faded away under my 'real' name and there are no reviews, so please someone, anyone, lol, be the first!
In answer to my original musing question, yes it is good to think of lost loved ones, because as the good memories come flooding back, so too do the feelings of well being, and dare I say, old hopes and dreams, we thought were long gone.  Today, as I think of my old Dad, and the Scotch he would be getting in, lol, I can see his beaming face and tears of pride as my play came on the radio.  He never stopped believing which is making me wonder why I did.
That memory has given me the confidence to market my work, failure to do so being my biggest flaw as a writer.  Lack of confidence, lack of time, I hate being dragged away from writing, but something  I really must tackle next year.  I have a whiteboard on which I accidentally wrote 'New Years Resolutions' in permanent marker - ergo, it is only really valid for about one week a year.
I jest of course.  It's all very well writing books, but I really ought to 'sell' them - even Charles Dickens visited town halls to read passages from his books.  I pay homage to Dickens of course, but also to Moll Flanders and the feisty Scarlett O'Hara.  The lack of strong female 'leads' in my upbringing, drove me to create one!  Constance stood out immediately from 20,000 scripts for good reason.  Please do read it, share it, retweet it and tell your friends about it, especially those producers looking for projects.  Constance is as fresh, original and appealing as it ever was and just waiting to be scooped up.
It is sad that I have to say this, but as a writer I have been blacklisted for years for my views on the missing Madeleine case.  My blog stands as testimony to the fact that my views are not 'hate' filled, it's neither my nature nor my style.  I know that people return here again and again, not just to catch up on Madeleine news, but also because my writing is appealing, entertaining and dare I say it, compelling.  Well yes I dare, because it has taken years to perfect my style doncha know dahlinks!  Goes without saying that my plotting and story telling is divine!
OK, maybe a tad over the top with the confidence there, I think have overdosed on Bette Davis this Christmas, the glamorous Bette obviously, not Baby Jane.  Though some might argue that.  Please be among the first to read Constance, she is character you will never forget.
https://www.amazon.co.uk/Books-Rosalinda-Hutton/s?ie=UTF8&page=1&rh=n%3A266239%2Cp_27%3ARosalinda%20Hutton
£2.47 on Amazon
Free on Kindle Unlimited

Posted by Rosalinda Hutton at 22:15