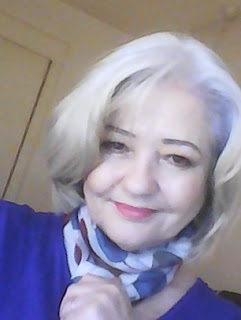 Apologies for my absence, I have been having a rather pleasant sojourn from my blog, which judging by my postbox has gone off in all sorts of strange directions, none of which, I'm afraid give me any inspiration.  I am wiping the slate clean and starting anew.

The weird veering off is probably my own fault, because I have completely given myself over to hedonism since the trauma of the last General Election. In the nicest possible way of course, hedonism to me is switching off all the worries and having green tea in a china teacup.  My present life philosophy is, 'it's beyond my control'.  My theory is, you only torment yourself with a problem because you have an innate belief that you can somehow solve it.  Accepting that you can't is like having a huge weight taken from your shoulders.

I'm not sure 'it's beyond my control' would have worked when I was younger, because then I believed if I worked hard enough and with ambition and tenacity, I could achieve anything.  In fact, people would often say to me, what a shame you don't use your talents for good.  A bit harsh, as I always took the side of the underdog, but maybe that's what they meant.  I was way too into lost causes.

My present obsession is US politics, their anchors and reporters are way more glamorous than our own, and their villains more blatant and cartoonish.  Most particularly Donald J. Trump.  As I have said many times over the years, I have been on a lifelong quest to discover the root causes and manifestations of true evil.  Now it's as if, Satan himself has put forward a prime example.  But what's scarier still, is how many people stand by his crudity, his ignorance and his racist spite, what a cruel, cruel world this is becoming.  Our own politics, I can't even look at.  I am hoping our Government at least, is going for more honest approach to the coronavirus because our leader is held to account in Parliament once a week.  I can't say I understand US politics, but it seems to me their President isn't held accountable to anyone!  I'm hoping someone will put me right, but meanwhile, I will hit google!

Normal service, whatever that is, I am hoping will shortly be resumed.  My fingers are itching to get back to the keyboard, though not so much my depressing postbag.  I have already decided my days are numbered due to coronavirus (watched A Month in Wuhan), but strangely, that, I do not find depressing.  I have sort of decided I need to write something meaningful and significant before I'm carted off in a body bag to a mass grave.  I once wrote an 80,000 word book in 3 months, so I know I can do it.  Nothing like thoughts of dying in a massive pandemic to get the creative juices flowing.  Now would be a good time to do the whole Stephen King thing, and go isolate myself in a cabin in the woods with loads of liquor, a trusty old typewriter and one cigarette (seriously?).  Better my chances with psychos and Hill people than a ride on the London underground, though I may just kill myself if I have only the one cigarette.

On a separate note, the 'evil of Donald Trump', I would be interested to hear others' thoughts.  He doesn't appear to have come from an abusive home, it is highly unlikely he was abused as a child.  A dysfunctional home, yes absolutely, his father was almost certainly absent (making money) as he grew up.  He has siblings who are successful, and one sibling who died from alcoholism.  He himself was sent away to military school, which sounds like a last ditch attempt by his parents to curb his, err, evil.  He was probably the kind of kid who tied fireworks to puppydogs tails.

His constant self praise and need for praise is almost childlike.  Like he is constantly shouting 'hey Dad (or mum), did you see me do that?'.  More likely Dad, because he was the moneymaker, but also highly likely he has huge 'mummy' issues.   Whenever he confronts a formidable woman, he makes sure he has a gang with him.  He is always looking towards male 'alphas' eg. Epstein to come in with him on the abuse and the joke.  In my experience, a guy, who has to prove how heterosexual he is in front of his mates, usually isn't, he's just in denial.   There is a huge difference between men who truly love women and men who don't - one day I will write a blog about it.

On the Trump thing, I once had students of psychology following my blog, and of course people who are just as interested in human behaviour as I and I hope some might comment.  My mind is blown, what we are watching now is so far from normal, a world leader of the '1984' and 'Brave New World' variety - he has surely surpassed Hitler?

Once more, I find myself with no-one to discuss, in the kind of depth I want, all these huge scary subjects, which I why I started a blog!  I really want to hear the opinions of others.  I rarely have the opportunity to be in the company of people who share my interests.  My dear old dad tried to tell me, as kindly as he could, that 'normal' people just weren't interested.  I had a tendency at the time to recount every detail of every book I ever read to anyone who would listen.  In retrospect, it probably was vexing.  I remember how excited I was way back in 1999 when I discovered a chat room called 'book chat' - jeez was I naïve!

Did I ever find like minded people on social media?  LOL, yeah a few, once I fought my way through the myriad of psychopaths, sociopaths, zealots and altogether unstable lunatics who use social media and anonymity to act out their antisocial fantasies, it truly was like trudging through a swamp battling leeches.  But it forced me to create my own blog, something over which I would have total control.  Besides which, I was getting pissed off at being censored, suspended and banned from all the 'regulated' facebook pages and chatrooms. But I have waffled, my point was, there have been many interesting and enlightening debates and discussions on here that I have really enjoyed, ergo, yeah, a lot more like minded people than not.

Ps.  I went out today and stocked up on longlife milk and toilet roll, the wine is already running low :(  The craziness for hand sanitizer I just don't get.  Just wash yer fffing hands!  Hand washing is one of my OCDs and no, a squidge of a foul smelling, instantly oxidising, alcohol based chemical goo just doesn't compare.

Posted by Rosalinda Hutton at 02:11