WHITE HAIR AND HOW I SURVIVED THE LOCKDOWN 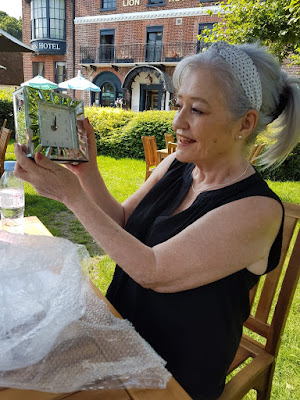 It's not how much you love, but how much you are loved by others (Wizard of Oz to Tin Man) and today and whole birthday weekend actually, I have really felt the love.  I feel blessed.

As can be seen I have completely transitioned from (fake) brown to white (blue) and I'm OK with it.  Ditto hitting the grand old age The Beatles sang about.  The lockdown has left me with long blue locks and I don't hate it.  I had intended to get it all cut off as the lockdown ended, into a style more fitting of a senior citizen but I watched multiple beauty vloggers my age and above (yes, they exist) who wear their long white hair with pride - that is the cauliflower perm for over 60's is not compulsory!  Phew.  Happily, I have not had to do anything to my own hair other than wash it with blue shampoo.  (Many thanks to the reader who kindly recommended Fanola 'no more yellow' so long ago.  The blue gets darker and darker, lol, I am aiming for Weimaraner (dog playing piano) blue, but I may be over doing it, SMS (smart arsed son) thought it was Halloween!

The thing about old age is that you have no idea when you are younger, what you will be like as an old person.  I can't say I had ever thought about it, but now it's here I don't have any inclination to behave differently.  I still want to paddle in a river, drive a bumper car and order an exotic cocktail in a salsa bar.  The spirit is willing and indeed, chomping at the bit, but sadly, the body wants to find a nice place to sit down and have a cup of tea.  The week in New Orleans getting high with Jack Nicholson remains on the tick list, but tis now a distant hope, neither one is getting any younger, and it won't be the same if we have to use zimmer frames.

So what have I been up to during all this time.  Sadly not writing, this has been a case of writer's block that even Kathy Bates with a sledgehammer couldn't have dislodged.   But I have changed, I have re-evaluated my priorities, most importantly I have given much more credence to the words of the great Philosopher (and Beatle) John Lennon.  Life is about being happy.  And I have been really happy to explore  and enjoy all the other interests I have, without torturing myself for not being able to write.

In the Catholic Faith, binge watching is frowned on, actually I just made that up but I am sure it is as it involves idleness, gluttony and a lot of coveting.  I began the Pandemic totally absorbed in the 'Walking Dead' only to be left hanging on a cliff never to know how it all ends, doh!  I moved onto Project Runway, all 17 seasons, loving the creativity and quirkiness of all the competitors and of course, the fabulous fashions.  If I hadn't already chosen Edith Piaf singing 'No Regrets' for, what I hope will be a musical send off, I would have to say I do regret not paying attention in needlework class.

I then discovered Game of Thrones, a decade after everyone else, ha ha, but I was gripped.  Another blood and guts series that made me watch the episodes back to back.  I was quite taken with the Queen of Dragons, we have the same hair colour, sadly that's where the resemblance ends.  I think 'Walking Dead' had by that time desensitized me to all the slaying and killing and opened up a whole new world, catching up on good programmes I was too much of a wuss to watch.  Game of Thrones was sublime!  The characters, the costumes, the settings, each episode felt like a blockbluster, and indeed they were.

My next viewing addiction (of note) was The Vikings!  And this is where I hope Bjorn will pop his head in.  I loved the series about Ragnar Lothbrok (and sons) and I am now totally obsessed with all things 'Viking'.  All and any 'Viking' films and documentaries have me gripped.  I never knew very much about the Viking era to be honest, other than our primary school books, where vikings wore twin horned helmets.  Totally not true as I have now discovered!  And of course, being a Viking was a profession, albeit of the 'pirate' variety, not a nationality.  I was so interested to see that the Vikings, the Norsemen, came from all over Scandinavia.  I am blown away that they took off in such basic boats, braving all the elements and reaching places like Iceland, Greenland and Canada!  Of course their boats were not that basic, they were brilliantly designed and crafted, yes I am also watching 'how to build a Viking boat' programmes!  It has torn me away from the Tudors, I am finally learning about European history, Scandinavian especially and secretly hoping that I and my heirs have a drop of  Viking blood. Quite possible, they invaded Ireland and Scotland too!

I am currently looking for programmes about Viking 'finds', UK or anywhere, I am captivated! Also hoping Bjorn can recommend a Swedish or Icelandic, or indeed any Scandinavian made Viking films and dramas.  When I went through my Russian phase, I watched all things Russian (with subtitles), not only the dramas but documentaries, Russian vloggers and travellers to Russia.  We are so lucky in this internet age that we are able to 'visit' these places, and get a feel of what life is like in these far away cities.  On the Viking front perhaps I should take virtual tours of Swedish and Norwegian museums, I would love to know what Viking related treasures they have dug up.

But going back to age, I think I probably have changed.  I spend much, much less time thinking about things that distress me and much more time on things that make me happy.  I have mellowed, 'I accept 'it is what it is' in most situations where previously I would have been passionate.  Politically, I have never got over the Jeremy Corbyn loss, for me it was that one time in history where all the stars were aligned to bring equality and fairness to all.  He of course remains a hero, but that moment has gone.  Will it come around again, I hope so.  I have a lot of faith of in the young.

Well that turned very melancholic, but it is not a reflection of how I feel.  It is still a beautiful world and striving for happiness is an altogether agreeable past time.  I have say, on the age front, I have found I am treated differently with the white (blue) hair.  People are kinder, more respectful, they don't try to rush you, young people especially, they restore my faith in human nature.

Now I will return to my new favourite series the Medici and seeing the sites of Florence is definitely on my tick list.  Another history and costume drama, I just can't keep away from them.  I have a feeling I have watched this series before, but thanks to the dementia I can't remember any of it, I hope this happens with the Vikings, would love to watch it anew!

Posted by Rosalinda Hutton at 01:39