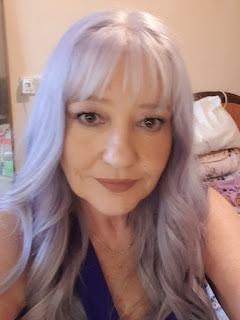 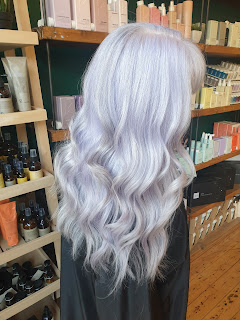 Well, that's it, finally I have been to the hairdressers.  The no more cutting, no more colouring began with the lockdown, but then just carried on when I realised that long hair is actually far less maintenance than short hair!  Who knew?  I must have spent thousands over the years having my hair done, hair cutting is the one area of my life where I have never economised and I have had some wild and wonderful hairstyles over the years, it's always kind of been my thing.  Some might say, if I had taken as much care with my choice of men as I do with hair stylists, it might all have been different...... ah, such is life. 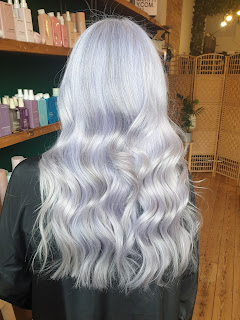 But little things make me happy, none more so than a great new 'Do'.  I had forgotten the joy and anxiety of going into a hairdressers, fearful yet excited as to how it is going to go.  I haven't been able to sleep since I made the appointment.  I can't forget the one time I gave my hairdresser free rein.  She cut my hair in the style of Friar Tuck, it was the 80's and boxy short hairdos were in.  There were no redeeming features, I could neither brush it upwards, backwards or anywhere other than square in the centre of my head.  The best I could get from family, colleagues and friends, and yes, there were snickers, was it will grow back.  Not when it's above your fecking ears it won't.

But I digress, I get very emotional when recalling bad hair experiences, mostly it has been a joy, in the past I would always go show my dear old Dad when I got my hair cut.  He knew the way to my narcissistic heart, if I was down in the dumps he would put his hand in his pocket for a couple of notes, so I could go and get my hair done.  His knowledge of psychology ran deep.  My next step would be to call my mother to discuss the new do in depth.  When I first went blonde she asked ' what, like Lily Savage?' why her first thoughts went to that extreme visual is mind boggling, but also hilarious.  Thereafter it would be 2 hours on the phone to my mate Big Lynn, she was a very patient woman, and then basically anyone who would listen.

Keeping people interested in the hair talk is kind of hard work.  I am currently exchanging texts with a friend who's first love is home decor, she is pretty skilled at steering the conversation into lampshades and wallpaper, getting the chat back to my blue hair is proving difficult, it's like a game of chess.  Smart Arsed Son managed a 'yeah, it looks good', but will not go beyond that.  He pointed out yet again that he is not the gay son I had always dreamed of.  Now planning a night out (for my 65th) at a gay club where the shallow subject of hair can be discussed with empaths.  The whole concept of empaths is quite new to me, and I am sure I am one.  Not a wise thing to claim as I have discovered.  Smart Arsed Son has found thousands of new and creative ways to say 'not an empath', which is vexing.

But I cannot complain, I received an abundance of compliments from the young girls who worked in the salon and the stylist who kept using words like gorgeous and fabulous, I felt like a film star!  For anyone who is interested, I got the colour from Fanola No More Yellow purple shampoo (on recommendation of a dear reader) and the Fanola purple hair mask (like a conditioner).  I haven't used anything else, not even regular shampoo, and my hair has been in fabulous condition ever since.  I was advised 'carry on doing whatever you are doing', which is a great thing to hear from a hairdresser.  Also great to hear long hair at any age is OK.   I think back in the 60's you would have been put in a straight jacket, or earlier still, the ducking stool!   I will shut up about hair, a blog on the joys of being over 60 follows:

Posted by Rosalinda Hutton at 18:13